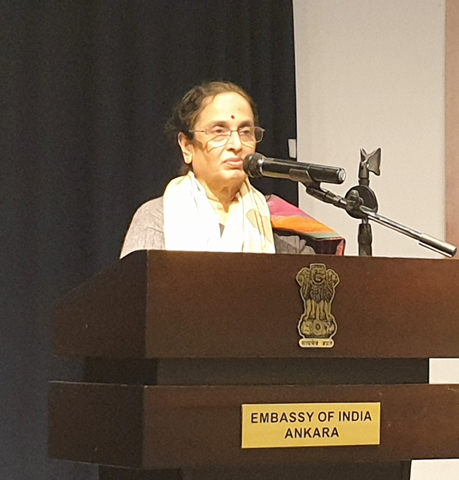 Dr Shobhana Radhakrishna is a globally renowned Gandhian recoginsed for his invaluable contribution to literature, social service and spreding vision of Mahatma Gandhi. She is on a mission to reintroduce Mahatma Gandhi to the people of India and abroad. Imbibing Gandhiji’s values as she grew up in his ashram (community living) situated at Sevagram in Wardha, Shobhana’s focal point is the Gandhian way of life and serving humanity.

She is the Chief Functionary of the ‘Gandhian Forum for Ethical Corporate Governance’ formed under the ages of the Standing Conference of Public Enterprises (SCOPE) for promoting ethical business practices and organisational integrity in Public Sector Enterprises & have given 278 talks in 39 major PSEs in India. She has regularly addressed young probationary officers of the Indian Civil Services in the apex training academies of Government of India.

She has over 38 years of experience in social work in development projects in different parts of India. Her background of Gandhian constructive work for the development and welfare of underprivileged communities has led her to dedicate her life to the cause of serving the poor.

She has travelled internationally to give lectures on the occasion of the UN International Day of Nonviolence since 2007 to Japan, South Africa, Thailand, Sri Lanka, Tunisia, China, Singapore, Indonesia, Netherlands, Austria and Germany to deliver lectures and seminars on Mahatma Gandhi. She was invited for a talk at the UN-ESCAP in Bangkok in 2014, in the Peace Palace, the Hague in 2017, in King Faisal Centre of Islamic Studies and Research, Riyadh in 2018 and in United Nation Convention Centre in Vienna on 2nd October 2019.

Her Gandhi Katha and lectures on Mahatma Gandhi’s vision and its relevance attempt to provide some principles, ideas and alternatives that can help us in our quest for more significant substance and also help address pressing social, communal and ecological challenges of our times. These lessons gleaned from Mahatma Gandhi’s life offer us invaluable advice on leading an enlightened, more meaningful, self-aware, socially responsible and saner life.

The national and international community has honoured her with several recognitions and awards. She was given the ‘Eminent Citizen’ recognition from the Ministry of Rural Development, Govt. of India from 2010-2013. She was the Chairperson of Gandhi Peace Centre, New Delhi. She is the governing body member of the ‘Mahila Samakhya’ program of the Government of Bihar; ‘Sarva Shiksha Abhiyan’ program of the Government of Tripura and the ‘Delhi Social Welfare Board’ of the Govermnet of Delhi. She is trustee of Lal Bahadur Shastri National Memorial Trust and the advisor for National Coalition for Education, India.