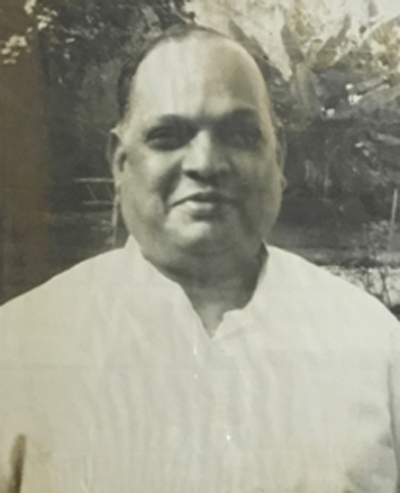 K.S.Radhakrishna was born on 12th October 1923 in Chitradurga in Karnataka to an eminent man of Nayeetalim, K.S. Srinivasachalru and Siddhanvanhalli Jayalaksmmamma. He was the eldest of seven siblings. He came under the influence of his maternal uncle Siddavanahalli Krishna Sharma (4 July 1904 - 14 October 1973), who was a noted author, translator, freedom fighter, journalist, social worker and educationist, who inspired him to join the freedom movement under Mahatma Gandhi. .

K.S. Radhakrishna complete his M.Sc. in Chemistry from Banaras Hindu University and immediately thereafter in 1946 joined Mahatma Gandhi’s Ashram in Sevagram, Wardha, Maharashtra where Gandhiji’s pioneering experiments in the field of ‘Nai Talim’ or Basic Education were being carried out under the leadership of the educationist couple E.W. Aryanayakkam and Smt. Ashadevi Aryanayakkam. Radhakrishnaji joined the Nai Taleem and post basic school in Sewagram. He was the Principal of the school from 1947 to 1958 and was also awarded a year's associate ship of the Institute of Education, London in 1953 he took the 'Teachers Training Diploma'

In 1948, when the country witnessed the holocaust of partition, Radhakrishnaji was put incharge of the rehabilitation of refugees from West Pakistan ( refugees from Bahawalpur in Multan state) at Rajpura in Punjab from 1949-52 under the guidance of Smt. Ashadevi Aryanayakkam. He stayed there with his wife, Kamala Radhakrishna and was assisted by 40 of his students from the Post Basic School. He returned to Sevagram in 1952 to resume his work in NayeeTaleem and Post Basic School

Radhakrishna worked closely with Acharya Vinobo Bhave, during his efforts to secure Bhoodan and Gramdan from 1952 onwards. From 1959 to 1961 he was the Secretary of the ‘Hindustani TalimiSangh’ in Sevagram Ashram.

From 1962 to 1969 he was the General Secretary of the Sarva Seva Sangh, Varanasi an umbrella organization of all the constructive work organizations in India and worked in close association with Jayaprakash Narayan ( popularly known as JP) to carry out JP’s vision of rural reconstruction through agriculture and village industrialization (AGRINDUS).

Radhakrishna was also the member of several constructive work and educational institutions, notably All India Khadi Village Industries Board, National council of Basic Education, Central Advisory Board of Education, All India Shanti Sena Mandal. He was in the Governing Body of the Gandhian Institute of Studies, Varanasi and Gandhi Smarak Nidhi, New Delhi.

From 1969-1990, he was the Secretary of the Gandhi Peace Foundation, New Delhi and was mainly responsible for making it known as the premier Gandhian organization internationally.He was Secretary-General of the International Conference in Bangladesh convened by Jaya Prakash Narayan in 1971, to draw world attention to the genocide and suppression of Human Rights in the erstwhile east Pakistan. He mobilized Gandhian groups to work for relief and latter rehabilitation of millions of refugees from Bangladesh.

Radhakrishna worked closely with Jayaprakash Narayan and was one of the key figures in the struggle of Gandhian Organisations against the emergency. In fact he was detained under MISA in 1975.

He was the founder member and Director of the World Conference of Religion and Peace, New York, U.S.A and was closely associated with War on Want, Quakers Group, International Fellowship of Reconciliation, War Resister's International, OXFAM & several other peace and nonviolent action groups in U.K..U.S.A. and Germany.

He remained a mentor and guardian for scores of Sarbodaya and Gandhian workers throughout his life. He was on the editorial boards of several Gandhian and Sarvodaya Journals. Notably, the journals ‘Gandhi Marg’,‘Gandhi Vigyan’, ‘BhoodanYagna’, People's Action and Everyman’s newspaper.

His main areas of work were in the areas of peace education, peace intervention, peace research, mobilizing and preparing the cadre if youth for post Gandhian constructive program through training for rural development.

From 1979-1994, as the Chairman of Gandhi Peace Centre (GPC) and the member of the Academy of Gandhian Studies (AGS), he was engaged in planning and implementing innovative experiences in rural development, including non-formal education and social action groups on environmental problems, small initiatives for mobilizing women, and promotion of small & appropriate technologies